Ego, as defined in Sigmund Freud's psychoanalysis, is generally considered a bad thing in today's society. People reproach others saying he/she has too much ego.

But Ego is the only thing which drives this world forward. I think it is result of evolution, it still exists today, which emphasis that Ego must have helped human beings in their survival. Evolution of brain led to origin of Ego which can be linked to origin of sconsciousness. Consciousness must have arisen later in human evolution.

If you look at world history, most of the big events (whether good or bad) were led by Ego of an individual. If you look into how Mao's China and its after effects like cultural revolution came into being, its largely due to the ideas which Mao had and his will to act on it. Hitler led to the formation of Nazi Germany.

The society doesn't evolve along normative principles, but what individuals believe should be done and take the risk to actually do it. All these individuals must have a high does of "Ego", as it is used in current terminology, otherwise they wouldn't have led to changes/achievements which they did.

Elon Musk has created a rocket which returns back to the earth after delivering its payload. He is planning a colony in Mars. All this is driven by a human, who thinks of himself as a separate entity - his ego. In words of Elon Musk, he wants to be hopeful about future and thats why he is doin all this.

Ludwig von Mises alludes to this in his book Human Action in which he says that human action (drive to a better condition of being) is the ultimate source of all decisions/"actions".

So, next time when you start criticising Ego, think again and ponder about how evolution of Ego has led to development of our society.

Recently came across the news of a friend from college days who succumbed to cancer. He was fighting it for some 2-3 years now and apparently had recovered from it. That's why this news of his sudden departure came as a shock to me.

Discussing this, one of our common friends quipped

In this uncertain life, only death is certain.

This is such a hard truth, yet most of us keep avoiding facing it. In fact, we would do anything except think about our own mortality.

Watch one more cat video. Pick up a fight on twitter. Go have that ice cream. Put fight for that coveted job. Anything except think about what is this all for.

It's like there is a hole in us, which we desperately want to fill. Either through relationships, status games, money or enriching experiences. But we never quite fill it. Never.

There's a story about Alexander the Great, one of the greatest emperors to have walked on the face of the world. On his deathbed, one of his wishes was to keep both his hands dangling out of the coffin. Surprised, his generals asked why such a weird wish. He replied:

If you are someone who believes that there is life after death or that you get resurrected, then at least you die with some hope. But what if you don't subscribe to such beliefs. What if after death you are just switched off - like a bulb is switched off. Nothing remains of you. You just cease to exist. How do you reconcile this?

Ernest Becker in his masterpiece, The Denial of Death, propounds that man's refusal to acknowledge his own mortality is at the core of shaping the nature of humanity. Death is something which gives meaning to life.

If all of us eventually die, does it really matter what we do in our life?

I recently finished reading Anathem and what a great read it was! Though filled with occasional meanderings by Stephenson, it covered topics which I didn't think fell under the preview of science fiction. Below are some of the points which I found to be interesting.

Spoiler alert! If you intend to read Anathem someday, stop here. The next section is full of spoilers.

One issue which I began thinking was - how do you build something for the long term? Religions last for a long time. Christianity is around 2000 years old. Hinduism or the set of beliefs which comprise Hinduism is around 4000 years old. Companies or corporations are fairly short lived - Google is only ~ 20 yrs old. Long lasting companies like GE are around 125 years and have already faded in glory IMO (though "company" as an idea is still very new - 1700s I think) While christianity and Hinduism are still very relevant. What are the properties of such orgs like religion which make them much longer lasting than businesses? Is it just that they solve much bigger problems (like meaning of life, purpose of existence) than companies which are primarily built on profit motive?

Came across this definition of Enthusiast. Made me wonder if this is what people mean when they write "Startup Enthusiast", "Blockchain Enthusiast" in their linked profile. Surprisingly I have never come across anyone claiming to be "Math Enthusiast" 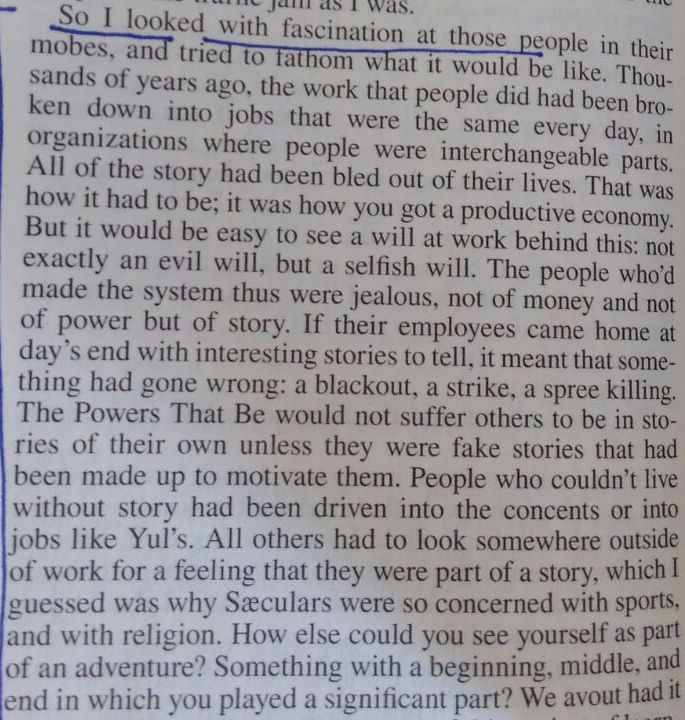 Here, Stephenson talks about how the industrialization/corporatization has taken away the story from the life of an individual and made him nothing more than a clog in the wheel. If we look into history, this is a fairly recent phenomenon. Before the conception of modern corporations and assembly, people used to earn their living as artisans, farmers or traders. An artisan has much more connection to their work than an industrial worker working in a modern corporation.

This is also the reason why relgion and sports become very important. They provide humans with a story to live by, rather than just being an insignificant speck in the grand universe.

In the book, Neal Stephenson talks about a Thousander (one who remains secluded in his math for 1000 years) who has acquired the capability to participate in many Narratives simultaneously. This is similar to the idea of Many worlds interpretation in quantum mechanics.

He also points to the idea of Quantum Mind which suggests that the emergence of consciousness in brain cannot be explained by classical mechanical theories and there must be some quantum phenomena happening in brain which gives rise to consciousness.

This idea is broadly related to the idea of quantum mind but also points to how one can train one's mind through disciplined thinking. Though the benefit of this may not be apparent immediately, the training enables one to perform when the time arrives.

You want to know how to paint a perfect painting? It's easy. Make yourself perfect and then just paint naturally.

Well, there are many more points which I want to talk about - but these are the top 5 big ones. May be I will do a second post talking about some more insights.

A few key questions which I came across while reading the book and my thoughts on it.

“A human being should be able to change a diaper, plan an invasion, butcher a hog, conn a ship, design a building, write a sonnet, balance accounts, build a wall, set a bone, comfort the dying, take orders, give orders, cooperate, act alone, solve equations, analyze a new problem, pitch manure, program a computer, cook a tasty meal, fight efficiently, die gallantly. Specialization is for insects.”

This post is just a compilation of some resources I came across when researching consciousness. I thought people on a similar journey may benefit from it.

Consciousness is a tough nut to understand. Many things which you take for granted get questioned, and I find that our understanding of the world is much limited as we delve deeper into the basics.

My interest in consciousness stems from the fact that Brain is one of the things which we as humanity have very little understanding of. In some way, it is one of the last standing unknown. With my recent endeavours in meditation, I have got more curious about how our brain works and how it gives rise to consciousness.

While there has been a lot of discussions done on this aspect from a philosophical point of view, I think a lot more can be done with the technology.

My current approach is to understand more about the brain in terms of technology and its information processing capabilities. I think this would lead us to take a better shot at understanding consciousness.

Here are a few resources I found interesting. 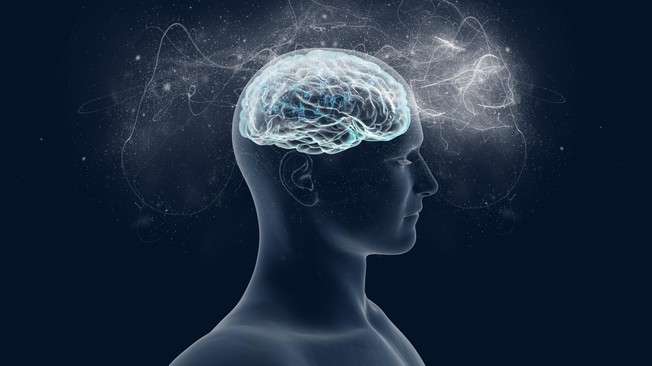 Have been reading a bit about consciousness and it seems that the following topics are closely related:

How does a network of billions of neurons lead to a consciousness? How does the “I” originate?

The question is more complex than it looks like and surprisingly, from what I have learned till now, there doesn’t seem to be a consensus on the answer.

Different disciplines try to approach this in different ways. The growing feeling which I get from following the different lines of thought is that the current “real world” which we perceive is a very small microcosm of the complete set of “realities” which can be there. As we relax the small set of conditions in which we spend most of our lives, the perceived reality changes dramatically.

For example, the concept of Time which we take for granted in everyday lives is not so simple. Einsteinian physics demonstrates how the concept of time changes dramatically as objects start traveling close to the speed of light. Time can dilate or run fast.

While the first 3 are states which most of us are aware of, the 4th state is a state of complete awareness () achieved by people doing meditations. These different states are confirmed by different EEG signatures, as confirmed by many researchers on meditation. So, there is a biological correlation with different states of consciousness. But the causality is more difficult to establish.

Does the mind lead to different EEG signals, or does the different firings of neurons lead to a different level of awareness?

According to one hypothesis, the consciousness is a by-product of the humming of different neurons. It is not the intended effect but a side product which emerges in the process.

This is also the classical mind-body debate. There can be 2 solutions:

Does the brain(body) give rise to mind? In that case is mind a different entity than brain?

A closely related topic, which is starkly showcased in one of the stories() in The Complete Robot by Isaac Asimov is the emergence of consciousness at advanced level of intelligence. Basically, once computers get sufficiently advanced - they develop a “consciousness” which has similar electromagnetic signatures to what we currently refer to as “consciousness”

If “consciousness” is an emergent property of a high level of intelligence, then it could be just as well possible that human beings are just highly intelligent organic computers created by some more intelligent species. Similar to how we have created computers. That lends credence to the SIM theory which even Elon Musk supports, that our current world is just a simulation.

An enquiry into these issues, makes me feel that the real world which we perceive is just so much a function of how we think about it, rather than what it actually is. The writings of Upanishads which seemed a lot of mumbo-jumbo to me some years back seems so much more insightful now - as at least their language points to ideas which I have laid out above.

“When I was a boy of 14, my father was so ignorant I could hardly stand to have the old man around. But when I got to be 21, I was astonished at how much the old man had learned in seven years.”

The same seems true for Upanishads/Ancient philosophers to me.